The Judge in the Access to Work cap case has today said that he did not think the Public Sector Equality Duty (PSED) was breached. 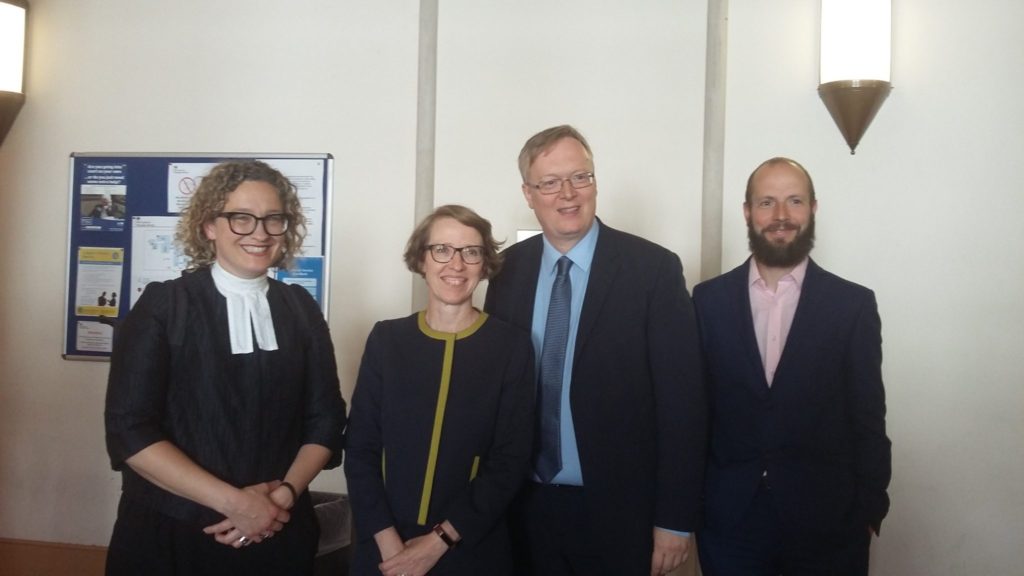 We are in no doubt that this case was a major factor which persuaded the government to increase the cap and put in place some mitigating measures for people still affected by the cap. For us pursuing it was the right thing to do.

The government’s arguments in this case have confirmed that true motives behind their policies are not about removing barriers and helping each Disabled person to fulfil their potential and pursue their dream career, but to push as many Disabled people as possible into any kind of jobs. The cap punishes people who need expensive support. It bars Deaf BSL users from senior positions and we are disappointed that this was considered to be ok.

The case never looked at all the other problems with Access to Work which we know are ongoing and we will carry on campaigning against.

Giving judgment today in the High Court, Mr Justice Kerr did not think the Public Sector Equality Duty (PSED) was breached because he believed the whole process was to support disabled people into work. He agreed that Mr Buxton and other Deaf people were disproportionately worse off because of the cap but he thought the increased cap was justified, mainly because he believes it was a legitimate aim to get more disabled people into work even if it meant some people did not get all the support they needed as a result.

Mr Buxton, the claimant, states “It was very clear that the Government had to increase the cap by 35% to £57,200 a few weeks before the judicial review hearing; this alone was a great result making a lot more money available to Deaf and disabled people. Without this increase, I almost certainly would have won the judicial review case but the judge believes the increased cap was justified. Government lawyers admitted I would be more disadvantaged but that the increased cap only gave me very little disadvantage. We argued that the Sayce Report revealed a £1.48 return to the Treasury on their £1 investment in Access to Work to support the point that the cap is not needed. However, the Government have disagreed with this figure and have refused to answer how much they believed was returned to the Treasury from their investment. We will have to keep pressuring the Government to reveal the figure in the Commons as they have promised to share information several times in the past few years but are yet to do so. It has been clear for many years that the Government needed to either provide this information or commission more research to help fund the scheme, but it took this case to force them to start that further work.”

“I would like to add that the Equality Act does not sufficiently protect Deaf people using BSL despite Ministers and MPs repeatedly saying that it does. This judicial review judgment shows how hard it is to protect our rights as Deaf people using BSL as our first or preferred language. The Government supports the economies of cost over our basic human rights, therefore we have to campaign for the Equality Act to be strengthened, especially as there is no legal status for BSL in this current Act!”

Louise Whitfield, solicitor for Mr Buxton, said “This is one of the very few cases in which the courts have been asked to look at the rights of Deaf people using BSL as their first or preferred language and the impact on them of a system which fails to properly protect their fundamental rights in this respect. Despite the very real gains of the massively increased cap, it is extremely disappointing that the Government failed to recognise the significant adverse impact on Deaf people of preventing them from working in roles that need high levels of support. We will never see equality for Deaf and disabled people if this remains the Government’s position. We believe more judicial review cases in future will influence Parliament to review the Equality Act if all these cases are lost in favour of those who can be ‘allowed’ by law to discriminate against Deaf and disabled people. For example, Mr Buxton has instructed me to take up a new judicial review on the inclusion of Deaf people on jury service. This will further test the Government to show its commitment to the spirit of the Equality Act or to continue simply ignoring the fact that it is possible for Deaf people to serve as jurors in this modern, inclusive and accessible society without any direct or indirect discrimination.”

Mr Buxton has decided not to take this case further in the Court of Appeal as he believes this is unlikely to lead to the end of the cap or better recognition of the rights of Deaf people. Therefore he urges Deaf and disability rights movements to press on Parliament to strengthen the law including the provision of a new BSL Act, and to make the Government reveal the return on investment in Access to Work funding. Mr Buxton’s case was funded by the Equality and Human Rights Commission. ENDS.

1. This statement is issued by David Buxton, the claimant in the judicial review claim; he can be contacted on buxtondc@aol.com.

2. More information on the wider campaign to Stop Changes to Access to Work is available here: https://stopchanges2atw.com/.

3. Mr Buxton was represented by Louise Whitfield of Deighton Pierce Glynn; she can be contacted on 020 7407 0007 and the judgment will be available in due course on the firm’s website at https://dpglaw.co.uk/.