Our response to the Work and Pensions Select Committee’s new report into the disability employment gap, including the Government’s plans to cut the Employment Support Allowance for new WRAG claimants. 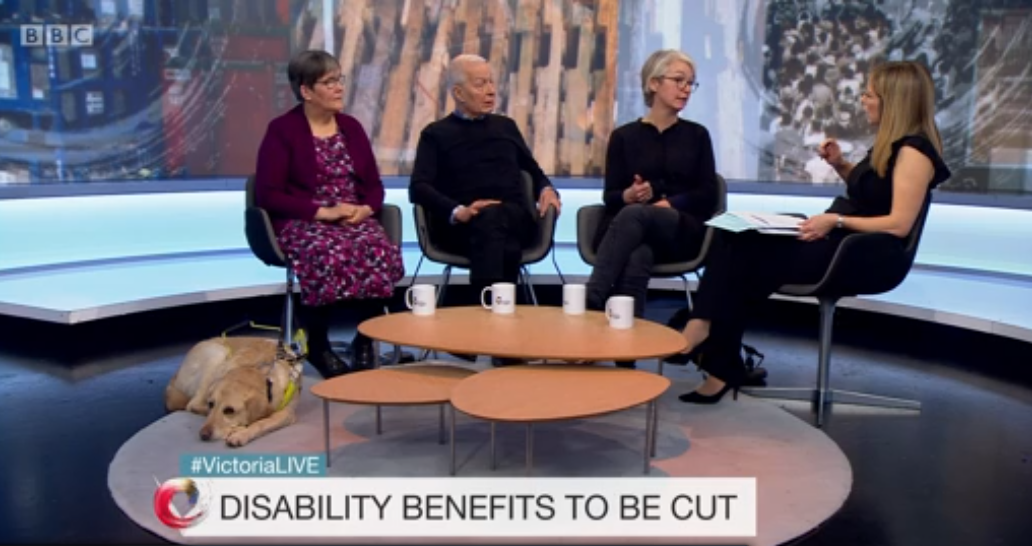 The Government plans to cut disability unemployment benefit (the Employment Support Allowance) for new claimants in the Work Related Activity Group (WRAG) from April 2017. The planned cut will reduce payments by £29 a week, from £102 to £73.

Last week the Work and Pensions Select Committee released their report into the Disability Employment Gap, which raises concerns about the Government’s decision to align the rate of ESA for new WRAG claimants with the current rate of Jobseekers Allowance (£73).

You can watch the segment here from 1hr 16m.

We think the government needs to rethink their decision to cut ESA WRAG. Tracey Lazard said “The cut to Employment Support Allowance will be devastating. £30 a week might be nothing to some people but for Disabled people in the work related activity group this is a third of their income gone.”

If, after your assessment for Employment Support Allowance, you are deemed fit to find employment, you are placed in the Work Related Activity Group. Around half of the 450,000 people currently in the Work Related Activity Group have learning disabilities, autism or mental health conditions. “These are people who suffer the worst discrimination and as a consequence have the lowest employment rates,” said Tracey Lazard. “The ESA recognises that – it’s a civilised response to a situation where Disabled people aren’t able to work… To put people on JSA equivalent is punishing people.” A further 48,000 people in the WRAG have progressive conditions such as MS or Parkinsons.

Jobseekers Allowance is intended as a short term benefit with people moving off it within around 6 months. Due to discrimination and the barriers Disabled people face, it is far less likely that Disabled people will find employment, and will face poverty for far longer than 6 months.

The Government says the cut will only affect new claimants, but if existing claimants move into work that does not work out for them they will then go back into WRAG on the lower payment, providing a disincentive to seek work that might not be sustainable. And as Sue Bott said, “There is no evidence that this will be an incentive – in fact it will be the exact opposite. Putting people into poverty means that they’re going to have to focus all their efforts on just surviving on a day to day basis, and are not in a position to be able to work.”

All evidence points to how this will move those Disabled people affected further away from work, without enough money for mobile phones or travel to interviews or decent clothes. A survey of people in WRAG in October 2015 found that a third of respondents currently struggle to eat on the amount they receive now. 7 out of ten said the cut would affect their health, and 49% said the cut would mean that they would return to work later rather than sooner.

Stigma and disability discrimination in the workplace and lack of support for Disabled people to get into employment are major barriers that Disabled people face that need to be addressed – otherwise however much disabled people want to work, they won’t be able to.

Whilst we welcome the Work and Pensions Committee report we don’t think it goes far enough. The Government’s underpinning approach to welfare continues to be punitive, causing harm to Disabled people while failing to support them into work. For example, the report calls for the Department of Work and Pensions to develop a code of conduct for Work Coaches on applying sanctions to Disabled claimants, including guidance on how to consider the impact on a claimant’s physical and mental health. We are calling for sanctions to be abolished full stop. A recent report from the National Audit Office has shown that they cost more to implement than they save in unpaid benefits whilst having a disproportionate impact on Disabled people – causing harm and in worst cases, such as David Clapson, deaths.

For more information on the ESA WRAG cut, download our 2016 briefing here.