Freedom of Information requests show chaos ahead of ILF closure

The findings from a recent round of Freedom Of Information requests to English Local Authorities (LAs) has revealed that the majority are not prepared for closure of the Independent Living Fund (ILF) at the end of June. 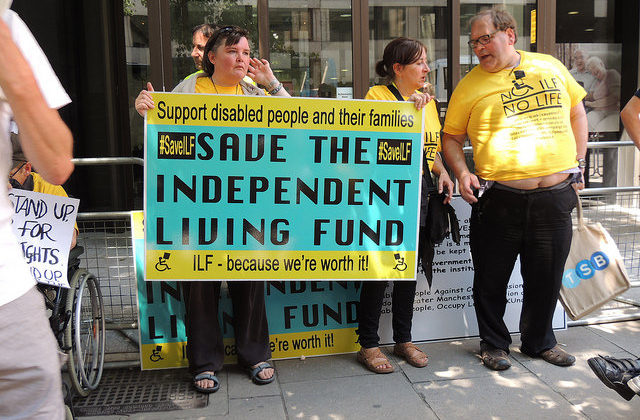 From July full responsibility for meeting the social care support needs of current ILF recipients will pass to Local Authorities. Along with these extra responsibilities the government has committed to devolve extra funding for nine months from July 2015 until March 2016.  This funding will not be ring-fenced and it is up to each individual Local Authority to decide how they will spend the money.

At the time of responding to the FOIs 12 said a decision had not yet been made as to how they will use the money. Some of these such as Southampton said they were waiting for confirmation of the amount of monies they will be receiving from central government before they decide.

31 said they will not be ring-fencing at all while 60 have decided to ring-fence to their Adult Social Care budget. 3 LAs will be ring-fencing to individual ILF recipients for a set amount of time (Camden for three months and Enfield and Slough for six months) while 9 said they will ring- fence individual awards until review and reassessment of individual support packages over the course of the nine months.

88 out of the 147 Local Authorities who responded said they had not received details about how much money will be transferred from central government. 41 said they have an indicative amount they are working to based on the amount paid to ILF users now minus the 5% “attrition rate” the government will be top slicing. Only 15 said yes they do know how much they will be getting.

Most LAs (78) are aiming to have completed reassessments of all ILF recipients in their area before 30 June 2015. 30 do not have a timescale for completion while 17 LAs have set a target date later within the next nine months. 12 LAs said reassessments would be completed between July 2015 and March 2016. 7 said they had already completed theirs.

For those LAs who said they had completed their reassessments it was not clear whether all of them were referring to reassessments to calculate the support package ILF recipients will receive from the LA after transfer from the ILF or whether they had answered the question in relation to the joint transfer reviews with ILF assessors which were conducted as part of the transition process.

Some LAs who have committed to ring-fencing such as Stockport, Islington and Kingston have also completed their reassessments. Others such as South Gloucestershire will be reassessing over the next nine months.

Linda Burnip, co-founder of Disabled People Against Cuts said, “Just a week before the closure of the Independent Living Fund  the majority of current recipients in England still have no idea what will happen to the funding they rely on to fund them to live independently in the community once the fund closes on June 30th. Many LAs have failed completely to keep recipients informed of what is happening leaving disabled people with high support needs and their relatives living in fear. The government have argued that the ILF should close and funding be transferred to LAs to negate the impact of the postcode lottery however the fact that an ILF is being retained and expanded in Scotland and Northern Ireland and work is being done to implement a similar scheme in Wales shows how flawed this logic is leaving only those living in England without on-going support.”

Q1. Will you be ring fencing the lF money passed to you to:
A) Individual ILF users
B) Adult Social Care
C) No ring-fence at all

Q2. Have you received the details of how much money you are being allocated and if so how much?

Q3. When will be starting reassessments of ILF users and wjen do you anticipate completing those assessments?For more information about these FOIs and the findings contact mail@dpac.uk.net or ellen.clifford@inclusionlondon.org.uk