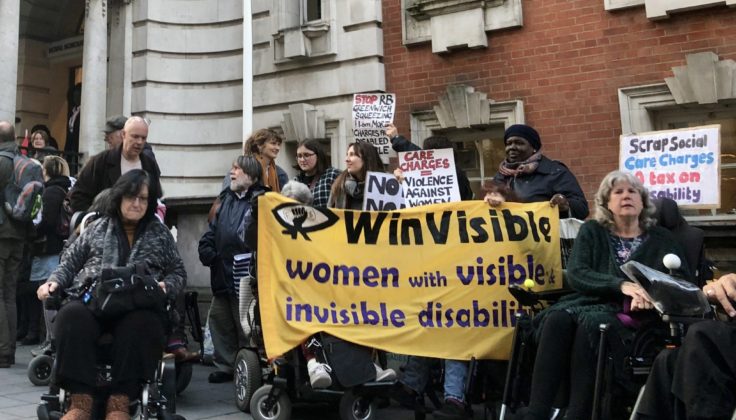 Over the last few months, Inclusion London has been supporting a group of disabled residents in Greenwich who are campaigning against the Council’s proposal to increase social care charges. The plans if implemented, will force some to give up their jobs, and volunteering work while pushing others into poverty.

“Disabled people’s human right to independent living is under threat in Greenwich, because of the council’s harsh proposals to increase charges disabled and older people pay for social care.”

“No one should be charged for care, getting out of bed and getting food in their stomachs. No one.”

The packed public gallery erupted in anger after the Labour council leader, Danny Thorpe, initially refused to allow Disabled people to talk. He explained that the decision would be postponed to enable the Health Scrutiny Committee to review the proposals in greater depth.

“You are torturing us we’ve been doing this for five months now. We are so stressed, anxious and suicidal about all this, and you won’t even listen to us. We’ve made the effort to come here and to speak to you politely.”

Greenwich councillors then got up and walked out of the chamber to cries and jeers of ‘shame on you, shame on you’. The Councillors eventually returned to listen to the residents affected by the proposals. We heard from several Disabled residents who explained the awful impact of social care charging. Kate Brown said “If I had to cut down to pay the extra, it would be on food, or the clothes and bedding that I need as I am double incontinent.” Another campaigner called on Greenwich to follow Hammersmith & Fulham and abolish all social care charging.

In light of the upcoming General Election on December 12, the Greenwich Cabinet decision on the social care charging proposals has been postponed until the New Year