The government’s current approach seems to stem from a continued emphasis on the medical model (a continuing emphasis on NHS services). Take action with a sample letter to your MP. A post from the National Survivor User Network. 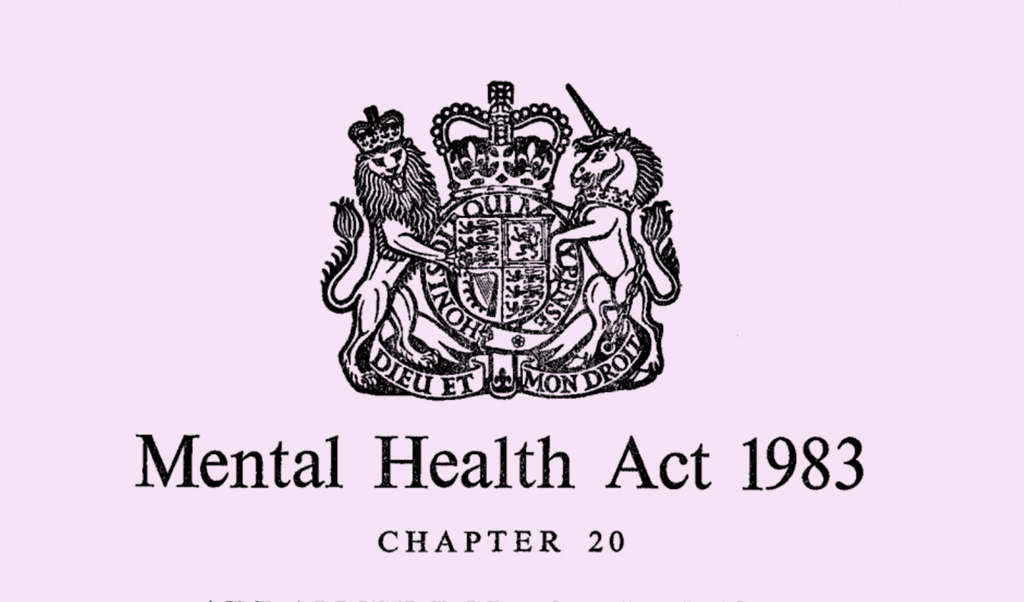 In June this year, the Queen’s Speech included the statement above which appeared to commit to working ‘towards a new Mental Health Act’.

It is positive that there are plans to reform the current Mental Health Act. However, the government’s current approach seems to stem from a continued emphasis on the medical model (a continuing emphasis on NHS services). The government is  also focusing on a reduction in detentions and compulsory treatment instead of recognising that these represent a breach of the United Nations Convention on the Rights of Persons with Disabilities (UNCRPD). At NSUN, we see the planned changes as an opportunity to advocate strongly for a rights-based Mental Health Act and for alternatives to a medical model, with investment above and beyond NHS provision.

As a member of the Mental Health Alliance, NSUN welcomed the possibility of research that was designed to gather views on the principles of the Mental Health Act, including views from those who use mental health services. In addition, the report which resulted from the survey contains some important emphases on improved rights for people detained under the Act.  However, there are also some serious shortfalls in the approach taken to the research and conclusions reached from the findings. Therefore, NSUN strongly emphasised the need for further research to be undertaken before the completion of the study and the circulation of the report; we wanted to ensure that those most affected by the Act were adequately represented in the report. Unfortunately, the report was published regardless and the Mental Health Alliance has been strongly promoting it with the government.

NSUN decided not to endorse the report for the following reasons amongst others:

Sample letter to your MP

If you would like to advocate for a rights-based Mental Health Act and for recognition of alternatives to the medical model and if you agree with our concerns about the Mental Health Alliance’s report, we urge you to complete the sample letter below and send it to your MP. (We recognise, of course, that you may want to write your own letter on the subject, but thought that a model letter would be useful.)

We have tried to make the letter as clear and precise as possible and so provide full links to further information.  (See below.)

You just need to:

It is useful to include your postal address amongst the contact details; MPs may want to be sure that you live in their constituency.

If you want to find out who your MP is, because you do not already know, go to http://www.parliament.uk/business/commons/ and type in your postcode in the Find Your MP box on the right hand side of the page. You will then see who your MP is.

MPs may have their own website where you can find out more about them and their concerns and interests.

Another useful website is https://www.theyworkforyou.com/ where you type in the name of your MP and the issue and it will show you all the statements she, or he has made on that subject.

When you get a reply please send it (or a copy) to:

You can send a scan or photo of the letter to info@nsun.org.uk

This is a particularly key time, because the government has just set up an independent panel, chaired by Professor Sir Simon Wessely, to review the Mental Health Act.

If you are concerned about the issues, please also use your networks to promote NSUN’s concerns and encourage as many individuals and organisations as possible to lobby their MPs about current plans for reform of the Mental Health Act and shortfalls in the Mental Health Alliance’s report.

1.     The International Network Toward Alternatives and Recovery and INTAR India Reflections. These demonstrate that people with lived experience who advocate alternatives to a medical model and a rights-based approach are not limited to the UK, but are part of an international movement

2.     The 2015 report from the Special Rapporteur for the United Nations Human Rights Council. This provides evidence dating back to 2015 both of UN challenges to psychiatry and of opposition at a UN level to detentions and compulsory treatment. (See especially paragraphs 93-100.)

3.     NSUN’s 2017 submission to the UNCRPD. This contains further evidence of the positions taken in NSUN’s Manifesto, including the Manifesto’s emphasis on alternatives to a medical model, improved anti-discriminatory approaches and an end to detentions and compulsory treatment.

4.     The presentation by Dorothy Gould, service user researcher, trainer and consultant, at the NSUN AGM this year. In this, Dorothy has summarised issues of concern for NSUN, including the lack of fit between current plans for reform of the Mental Health Act and NSUN’s Manifesto. She has also outlined some of the action which NSUN is currently taking.

5.     The UNCRPD’s final report about the UK’s treatment of disabled people, dated to October 2017. There are important recommendations for the government in this, including the need to repeal legislation which authorises detentions and enforced treatment. (See the recommendations under Articles 12 and 14.

Positions from other organisations

These may provide some support for NSUN’s position, but also fall short of it:

1.     As has been indicated, although NSUN welcomes the emphasis in the Mental Health Alliance’s report on increased rights for detained patients, NSUN also has serious concerns about the report. Influential members of the Alliance include Mind, Rethink Mental Illness, the Centre for Mental Health, Bipolar UK, the Richmond Fellowship, the Royal College of Psychiatrists and the Law Society, all of whom are supporting the Alliance’s Mental Health Act survey report.

3.     The Care Quality Commission (CQC) puts an emphasis on rights for detained patients within existing mental health legislation. CQC does not currently look at mental health legislation in relation to the sorts of rights issues raised by the United Nations Convention on the Rights of Persons with Disabilities. However, NSUN has representation at CQC meetings about the Mental Health Act and is therefore raising rights issues at these

4.     The Equality and Human Rights Commission (EHRC), together with related Commissions in the rest of the UK, has provided some support for NSUN’s position. This was through the UK-wide report submitted as part of the examination of the government under the UNCRPD. Dorothy Gould was able to do some lobbying about breaches of human rights under current mental health legislation. This resulted in a stronger stance being taken in the report about these breaches, if not as strong a stance as we had hoped.

5.     The European Committee on the Prevention of Torture (CPT) currently advocates improved rights under mental health legislation, but not an end to detentions and forced treatment. The Committee has been challenged to become more progressive, however. There have also been some interesting developments within Europe. For example, in Germany, although detentions are still permissible, it seems that enforced treatment has been reduced to 1%. (NSUN is currently seeking relevant documentation about this and will supply references when they are available.)

NSUN has also been making some important contacts with supportive individuals and organisations, including legal contacts, to gain support for a rights-based Act. In addition, we are working on a list of evidence which supports a rights-based approach. (More detail will follow, so watch this space!)

Please support NSUN as we continue to lobby for a fully rights-based Mental Health Act, if you are in support of this – by contacting your MP and by encouraging individuals within your networks and organisations known to you to lobby for a rights-based Act. Please also keep NSUN in touch with what you are doing and pass on any useful contact details and evidence to NSUN.