The PACE Trial: The Making of a Medical Scandal

Special, freely available issue of the JHP on the PACE trial. PACE was a controversial trial of therapies for patients with myalgic encephalomyelitis (ME)/chronic fatigue syndrome (CFS). The current review by NICE of these treatments presents an opportunity to bring clinical practice properly in line with scientific evidence. 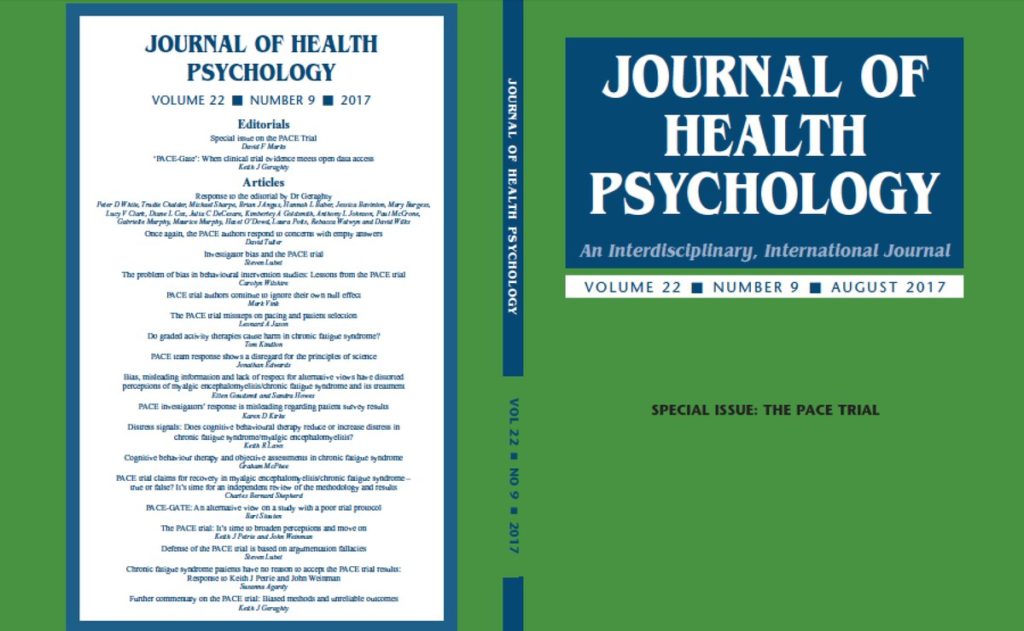 A Special Issue of the Journal of Health Psychology on the PACE Trial, is to be published and freely available online on Monday 31 July 2017. It marks a special contribution of the Journal of Health Psychology to the literature concerning interventions to manage chronic health problems. The PACE trial debate illustrates what can happen when researchers become entrenched in a particular point of view, and fail to engage in constructive exchange with critics and stakeholders. It reveals an unwillingness of the Co-Principal Investigators of the trial to engage in authentic discussion and debate. It leads one to question the wisdom of such a large investment from the public purse (£5million) on what is a textbook example of a poorly done trial.

Myalgic Encephalomyelitis/Chronic Fatigue Syndrome (ME/CFS) is a controversial and poorly understood disease that blights the lives of over 250,000 people in the UK and 1.0M Americans. People with ME experience a dramatic decrease in their stamina for ordinary physical and cognitive activities, a characteristic dramatic increase in symptoms after minimal physical or cognitive exertion called post-exertional malaise, and a myriad of symptoms including sleep dysfunction, orthostatic intolerance and cognitive dysfunction as well as fatigue and pain. Normal activities like walking, showering, having a conversation or writing an email can leave people shattered for days or weeks or may simply be impossible. Most people with ME cannot work and 25% are confined to their homes or beds. The PACE Trial sought to test if two therapies, a talking therapy called ‘Cognitive Behavioural Therapy’ (CBT) and exercise in the form of ‘Graded Exercise Therapy’ (GET), might help.

The Trial attracted unprecedented criticism, not only because it cost taxpayers an extraordinary sum (almost £5 million) but the trial itself was deeply flawed. The results are, at best, unreliable, and, at worst, manipulated to produce a positive-looking result. Patient groups have cried foul because they believe they are being sold a lie that talk therapy and exercise can cure ME/CFS when in fact many experience actual harm.

The PACE Trial was led by Professor Peter White of Queen Mary University London (retired), Professor Michael Sharpe of Oxford University and Professor Trudie Chalder of Kings College London. They published their results in the Lancet in 2011 with the contentious claim that CBT and GET brought 30% of patients back to normal while 60% improved. The patient community reacted with scepticism and after a long battle with the PACE authors, a patient from Australia, Mr Alem Matthees, won a Freedom of Information Tribunal case to gain access to a small sub-set of the PACE trial data.

It was discovered that the PACE authors had altered the way in which they measured improvement and recovery to increase the apparent benefit of the therapies.  Reanalysis showed that the improvement rate fell from 60% to 21% and the recovery rate fell from 22% to just 7% when using the original study protocol. The genie was out of the bottle.

In 2016 the Journal of Health Psychology published an Editorial by Dr. Keith Geraghty of the University of Manchester entitled ‘PACE-GATE’.  Geraghty suggested that the PACE authors had altered their procedures to make CBT and GET look more beneficial. The PACE trial team reacted with anger and submitted a cursory reply. A host of experts on both sides of the debate were invited by JHP Editor Dr David F Marks to write Commentaries on the PACE Trial. All Commentaries were peer-reviewed. The majority agreed that the PACE Trial was flawed, that the PACE authors had altered their methods, breaking a fundamental principle of clinical trials, and that results from the trial were unreliable.

It also highlighted that the PACE Co-Principal Investigators had conflicts of interest by acting as consultants to large insurance companies and Professor White had also worked as an advisor to the Department of Work and Pensions, a main funder of the PACE trial, with a special interest in reducing social security benefits to disabled ME/CFS claimants.

Despite many serious concerns about the PACE Trial, the trial continues to be used by UK Governmental agencies, the NHS and the National Institute for Clinical Care Excellence  (NICE) as part of the evidence-base  to recommend CBT and GET to sufferers of ME/CFS. The current review by NICE of these treatments presents an opportunity to bring clinical practice properly in line with scientific evidence.