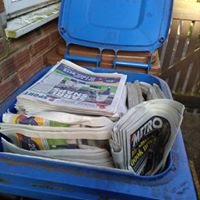 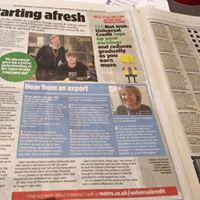 Disabled People Against Cuts (DPAC) have released a report detailing “the reality of universal credit”, with links to hundreds of newspaper stories from across the UK that have reported on the real damage caused by Universal Credit (UC).

The report is in response to Department for Work and Pensions (DWP) advertisements in the METRO newspaper which air-brushed concerns over Universal Credit. The adverts,  promoting Universal Credit, are not obviously from the DWP or a Government department and appear to be real journalism.   A leaked DWP memo mentions the avoidance of DWP branding on the adverts saying, “The features won’t look or feel like DWP or UC – you won’t see our branding, and this is deliberate.”

Members of Sheffield DPAC began the campaign by removing copies of the METRO newspaper, which is run by the same company that publishes The Daily Mail.

They have even offered a prize of a DPAC tee-shirt for the most creative way in which an activist can recycle or reuse a copy of the Metro, and so prevent the Department for Work and Pensions (DWP) advertising features being read.

Photographs on DPAC Sheffield’s Facebook site show copies of the Metro in wheelie bins (pictured above). They say “Re-use them, recycle them, just don’t leave these LIES on the stands”

The action has now spread to other cities including Bristol and London. You can follow the protest on twitter #DumpMetroDWPLies

DPAC have stated “This nonsense is going to be going on for nine weeks from this week and each week we will be stepping up this campaign […] we are absolutely not giving up […] if anything it just makes us angrier and more determined.”